ONCE IN NEED AND HELPED BY FOOD BANK, YOUNG MOM NOW WANTS TO GIVE BACK

BY JENNIFER SALTMAN, THE PROVINCE, Photo by mark van manen 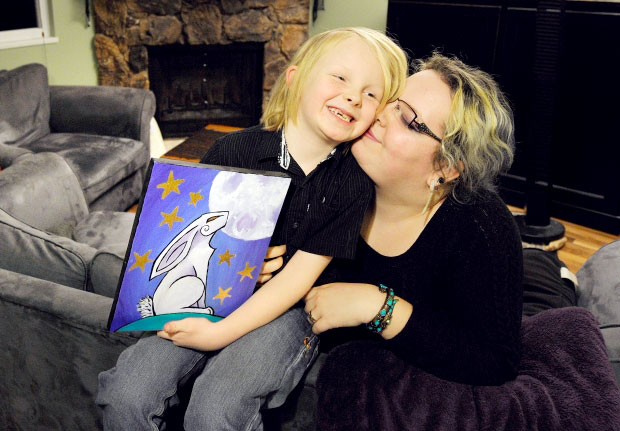 Five years ago, Lauren Martin made the difficult decision to leave an abusive relationship and strike out on her own with her 18-month-old son.

It was the generosity of strangers that helped Martin endure three months in a Calgary homeless shelter, a custody battle and the move back to her hometown of Port Moody.

“The day I left I basically had a nervous breakdown. I didn’t know if I was going to be able to feed my son at that point,” Martin says. “In hindsight, the kindness of people was what made it so we could get through.”

After returning to Port Moody, Martin, then 20 years old, began studying jewelry art and design at Vancouver Community College and relied heavily on her student loans.

“That was all the money that I had to pay my rent, and pay my bills and take care of my son, and all the supplies for school and everything I needed,” Martin says.

Martin wanted to provide all that she could for her son Julian, so she began visiting the food bank run by SHARE Family & Community Services and taking advantage of their counselling programs.

“I remember the first couple of times I went to the food bank being terrified to make eye contact with anyone in line. What if I knew these people, what if they knew me?” she recalls. “It’s hard when you’re in that position and you do need that help to ask for it, but you shouldn’t be afraid to.”

Martin also asked for help providing Christmas for her son. She says that without the Christmas hamper program at SHARE — which receives support from The Province Empty Stocking Fund — Julian wouldn’t have had presents under the tree from age two to four.

“No four-year-old out there should be let down because Santa couldn’t come and visit them when Santa gets to visit all of the rich kids,” Martin says. “The people that donated were absolutely amazing and gave so generously. It was very, very humbling.”

From the group of women who came to her door with boxes of gifts, toiletries and winter coats to the man who offered to drive Martin to the mall to shop for her son with donated gift cards, Martin says people have no idea how much their kindness helped. Thanks to those generous donors Julian, now seven years old, hasn’t had to go without.

Martin says things have greatly improved since she and Julian needed to use SHARE’s services. In 2009 she met Chad Martin and last year the couple married. They now live in Langley, where Martin runs a daycare out of her home. She hopes one day to make jewelry full-time.

“We’ve been able to pull ourselves up above the poverty line,” Martin says, but the 26-year-old hasn’t forgotten where she came from. “We have a policy in the house where we give back and try to at least make up a little bit.”