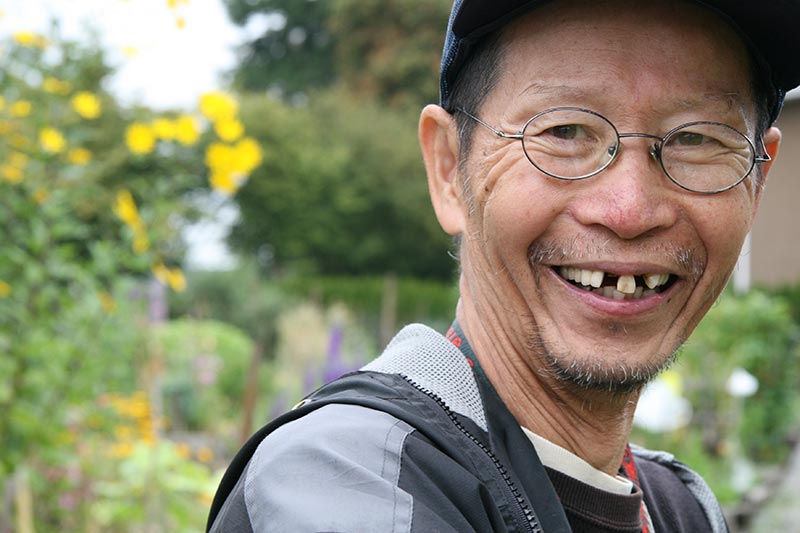 Tucked away behind North Road, at the corner of Whiting and Ebert, is the Burquitlam Community Organic Garden where members purchase plots to exercise their green thumbs.Among these are five donated plots that provide fresh, organic produce for SHARE’s food bank every week.

“Since the gardens started in 2000, we have wanted to give back to the community by growing a little extra food for the local food bank,” says Liz Hansen, President of the Burquitlam Community Organic Garden Society. “We are vey fortunate to have Ichi look after the food bank plots.”

Ichi Sumida, a retired man with a love for gardening, has been responsible for managing the food bank plots for the past seven years. He can be found at the garden every morning, dedicated to cultivating the finest produce and delivering them at their prime. “When one vegetable is finished the space is cleared and a new vegetable appears,” says Liz. Ichi will also take the unripe heirloom tomatoes home, lay them out to ripen for three weeks, and thereby avoid potential looting from passerbys. “He even spends the time to individually bag the tomatoes so that they’re easy for us to give out,” says Mike Trelenberg, Assistant Manager at the food bank. “That’s just his way.”

Mike also describes Ichi to be “as fresh as the produce he brings in,” referring to his friendly and energetic disposition. He takes a lot of pride in his volunteer work and strives to produce the very best.

Although he spends a significant amount of his time to this cause, Ichi shrugs off any acknowledgement and is quick to point out the contributions of others. “Colony Farms Garden donates, too,” he informs. Other members of the Burquitlam Community Garden also contribute by planting seeds in the food bank plots or donating produce from their own.

Through this shared effort, the Burquitlam Community Organic Garden has managed to donate over 1,000 pounds of fruits and vegetables every year!

As for Ichi’s dedication to the community, he attributes it not to his character but rather his stage of life. “I’m retired,” he says. “So I have the time.”